Last year I got an extra feeder for Hummie the Ruby-Throated Hummingbird. I hoped to attract more of these flying miracles, but it turns out I am blessed with just the one, who became a fast friend during the summer of 2020, when I tried to keep my distance from humans. (She’s back this summer. More in future posts.)

But not only Hummie likes my high quality nectar: the local ants and the odd wasp are also big fans of it. What can I say? Only the finest ingredients for my special summer guest! 4 parts distilled water to 1 part superfine crystalized white sugar, and making sure the feeder nor the sauce pan I use have any trace of soap on them make for highly desirable nectar.

The ants have no sense of self-preservation, and intoxicated by the sugar they’d climb inside the feeder, and died a sugary death. I can only hope that they were high and happy as they transpired. Not only is it sad for the ants, but it’s also a problem for the hummingbird: the dead ants carry fungi on them, which then breed in the nectar because it hangs in the sun, and it’s not sugary enough to be a preservative. If you don’t clean the feeder quickly enough, the hummingbirds can catch diseases and die.1 <– New! “Footnotes”, click to reveal!

I tried very briefly with a strip of tape, sticky side out, around the posts that the ants use to climb to the feeders. That would work: they were smart enough not to tread on it. But Hummie is about as tall as the strip of tape (2 inches) and I was worried she might accidentally get stuck. I quickly removed the tape.

Fortunately there is an “ant moat” built into the feeder, that with a little bit of attention from me will stop them from getting to the port holes. The basic idea is that the ants march along the hook down to center at the top of the feeder, but then encounter the water that surrounds the hook. They can’t make it to the rim, and because they don’t swim they have to turn back.

Last year, the location of my feeders meant the ants could by-pass the moat, and once one found the way in, they all followed suit.

This year, I’ve been a bit more organized and have activated the ant-moats. All it took was a piece of string, and tying a knot or two. I’m no sailor so my knots leave a bit to be desired, but as long as I keep the water levels topped up at the crown of the feeder, ants will be saved from drowning, the feeder will be cleaner for longer, and Hummie will enjoy ant-free nectar. I imagine the ants stomping their little feet in frustration as they march back to the ant colony, possibly throwing in a choice swear word here or there now they’re deprived of an easy source of food.

Now I just have to add “monitor the moats” to my daily morning routine.

I was all ready to publish the first newsletter from Backyard Wildlife College, but that is now pushed aside by the breaking news from this morning: mysterious massacre of multiple members of the Creepy Crawlies Division and vandalization of College infrastructure. This morning, it was discovered that the largest pitcher of the carnivorous Nepenthes (Sanguinea) plant has been destroyed, its contents dropped to the floor. 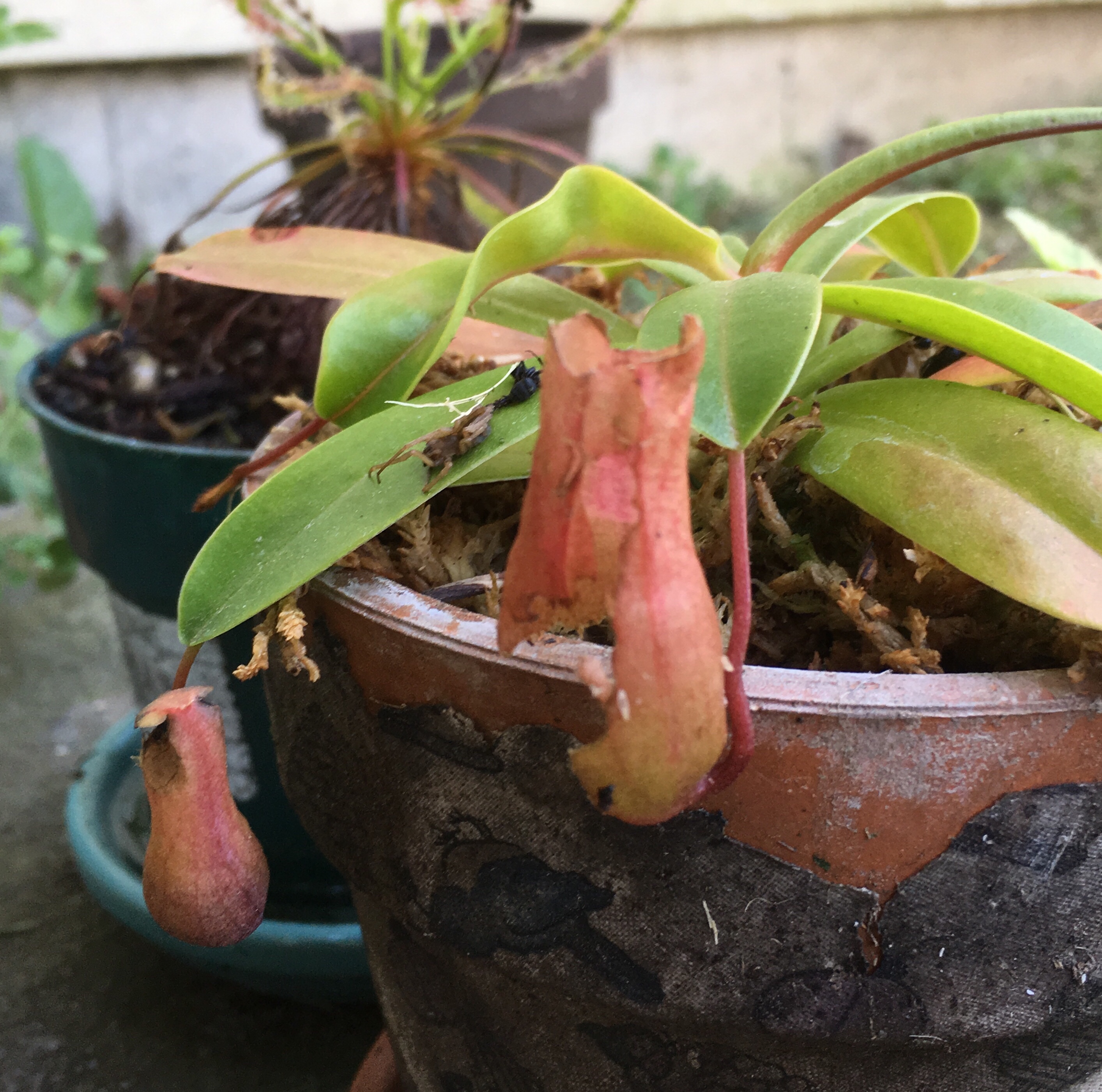 Upon closer inspection, the mystery deepened, with several ants and one arachnid left dead on the leaves. 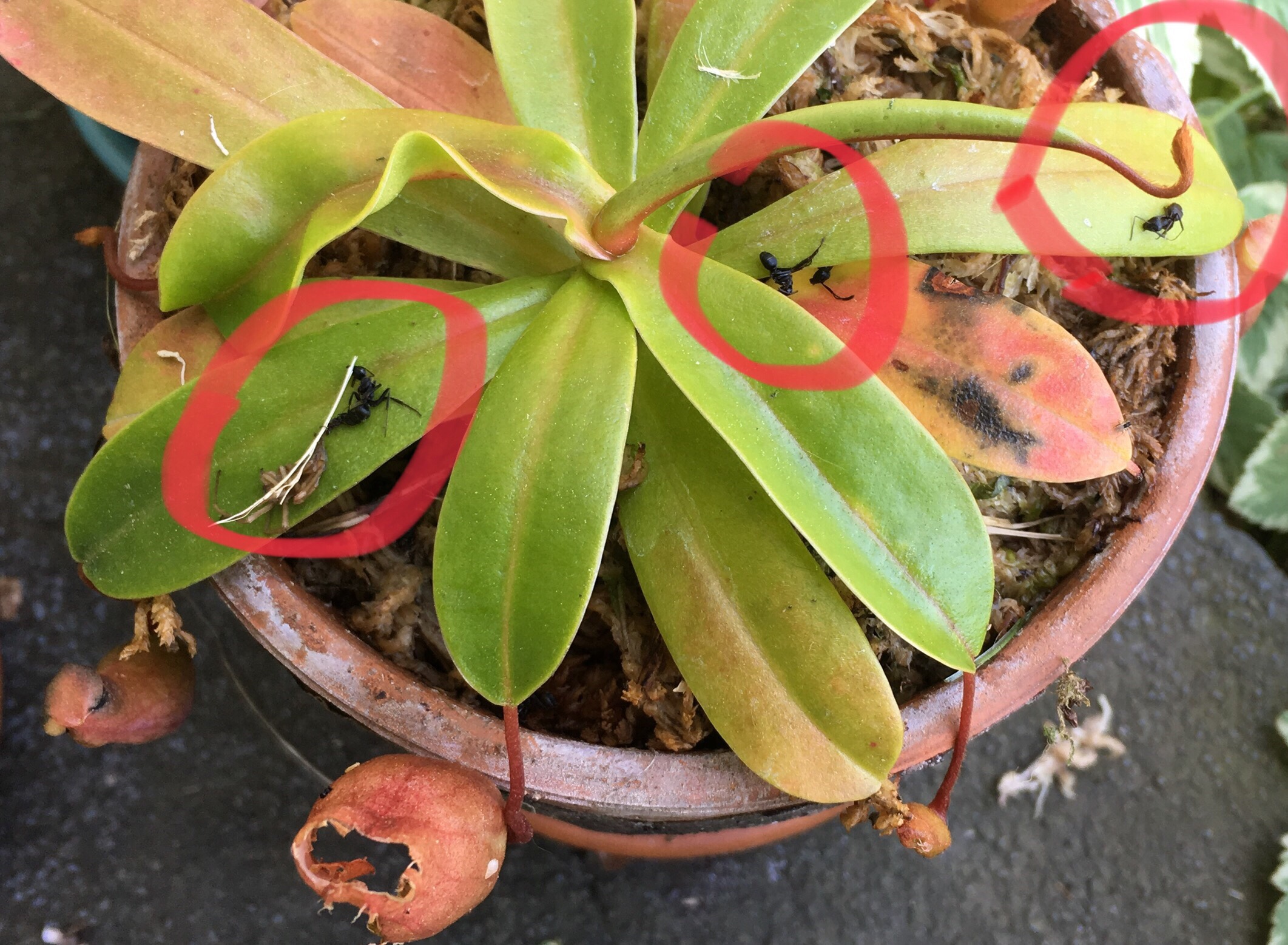 Victims of the events found on the plant; detailed picture of spider and ant on the left available on request.

The Backyard Wildlife College welcomes any information that may help shed light on these mysterious events.

The “Outdoor Ants” Program is continuing as usual; the Arachnid Department is rescheduling some classes and will be in touch with its students about these changes. The newsletter will be released in the coming week.